Wild sarsaparilla and poison ivy can, as they are emerging in the spring, look alike. They both have that reddish, brownish, shiny look. Even though wild sarsaparilla ultimately has 5 leaves per stem, on younger plants they sometimes appear as three.

Since I have both in my woods, and since I use sarsaparilla in my Coffee, Not!,* I need to know the difference, dontcha think? As I like to say, you should be 200% sure you can identify a plant before you use it.

I took a bunch of pictures to write up this article, and even looking at some I *think* I know which is which, but I can’t be sure on all of them without being back out there. I basically don’t pull up a plant until it’s perfectly clear it’s wild sarsaparilla. And there is some variation, but here are a couple of clues. 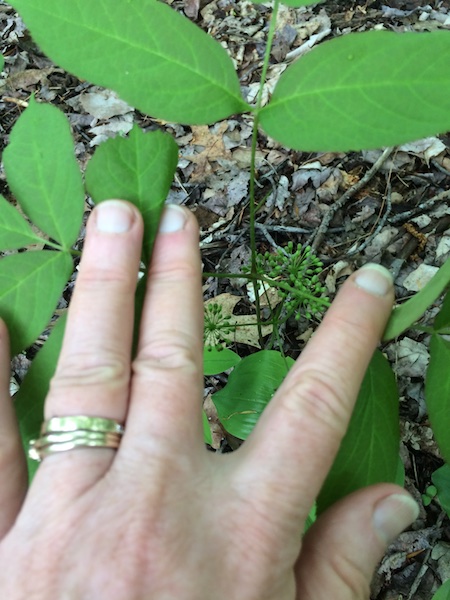 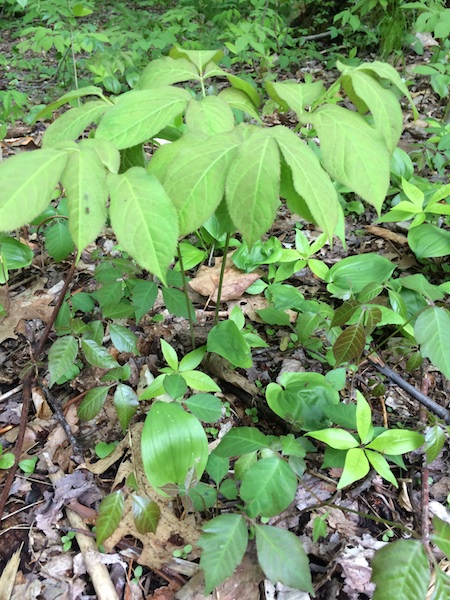 But here’s one that’s iffy. And that’s because they really look similar before the 5 leaves come out! I think this is wild sarsaparilla (see the 3 stems branching from one common point?) above poison ivy that sits closer to the forest floor (excuse my iphone’s depth of field). 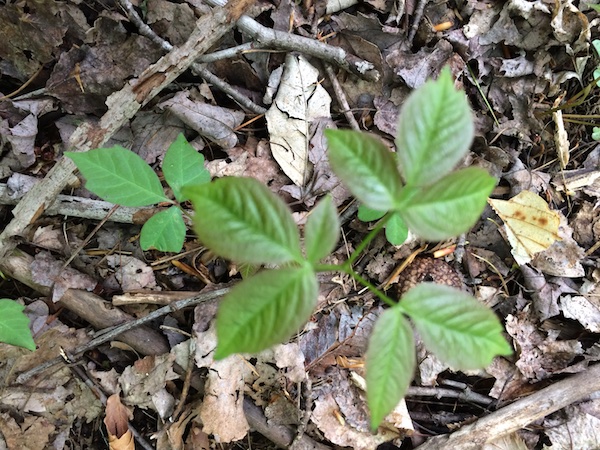 And pretty sure this is all poison ivy. If you look at the branching off of the main stem you see more than just 3 branches, although those top three all look like they are branching from the same point like wild sarsaparilla. But, also, the 5 leaves of wild sarsaparilla are not as spread out as these leaves are. Anyhow…all this to show you that YOU HAVE TO BE CAREFUL! 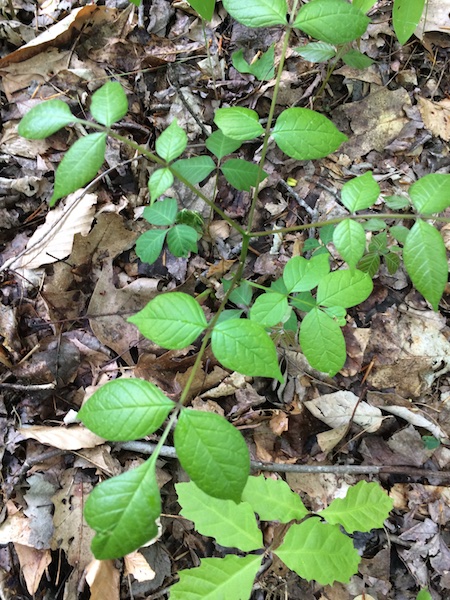 Earlier this spring, I had identified my wild sarsaparilla plants, and started pulling up the roots. If a plant popped up and detached from the root system, I stopped at that point and moved on to a different plant. I needed to be sure the root I was pulling was connected to the plant. It’s kind-of fun harvesting them and seeing how long of a root you can get! 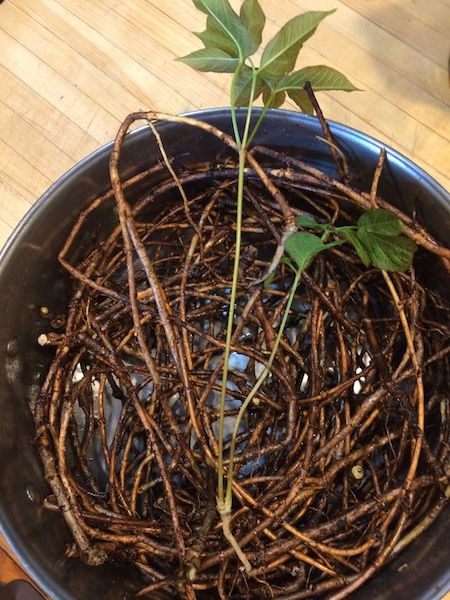 A bunch of wild sarsaparilla roots, washed and ready to process

One of the things about wild sarsaparilla roots is that they have a distinctive smell. They smell like….sarsaparilla! But after I had washed the roots, the smell wasn’t that strong (until I started cutting them). You can scrape a little bit of the “bark” off to reveal a whiter root underneath, and sometimes that is enough to reveal the smell.

But, as cautious as I am, and also prone to a wild imagination, I began wondering what poison ivy roots looked like. I was pretty careful out there, but could I have mixed up any roots? I couldn’t go on until I answered that question. And I started googling “the difference between wild sarsaparilla and poison ivy roots” and variations of that and all searches came up empty. So I needed to do my own physical research.

I donned gloves, and went back outside. And pulled up a few different poison ivy roots. I’ve pulled up poison ivy before, but never really studied the roots. This time I did. And I never found a root (besides the ones that start growing up trees!) that was as thick as the wild sarsaparilla, which isn’t really that thick and is pretty uniform with sometimes a thinner side branching root. I took a picture to compare the two. Can you tell which is which? 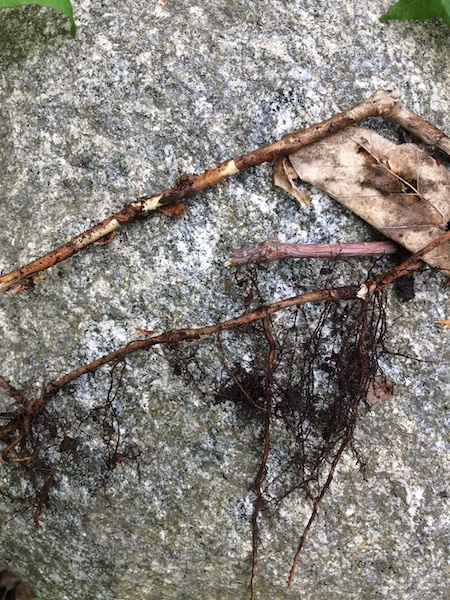 Both roots travel under the soil to connect plants. Poison ivy roots have more intermediate roots, and the vine is thinner and harder.

The top root is the wild sarsaparilla.

Okay, I felt pretty sure that I hadn’t gotten any poison ivy mixed in. I mean, as I said I made sure the root I was following as I pulled it up had been connected to a plant I was sure was wild sarsaparilla. But my wild imagination had made me paranoid. Because OMG, what if?

Anyhow, just to be sure, as I chopped each root, I also did the smell test. I never tried smelling the poison ivy root, but I’m sure it doesn’t smell like sarsaparilla! My bunch of roots all had that wonderful sarsaparilla smell. 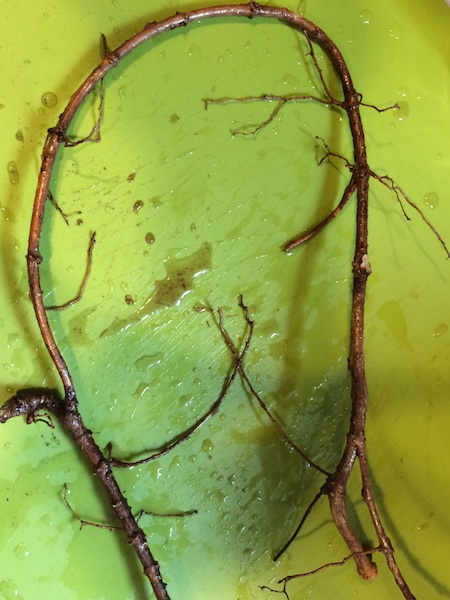 Wild sarsaparilla can have some intermediate roots, but the root clusters aren’t as prominent as those of poison ivy.

* When I run out of wild sarsaparilla, which I can’t get from my trusted suppliers, I switch to regular sarsaparilla in my Coffee, Not! That’s why sometimes you see “wild” crossed out on the label. It’s a stronger flavor, so I use less of it.