Last year I went to 3 wildcrafting classes with Emily French of Sweetgrass Herbals. At one of them she introduced us to witch hazel. I harvested a few leaves, then went to look for trees on my property, down by the stream. I found a few! So I picked a couple more leaves. And made a small tincture of them using alcohol. Later that year, as I was hiking the mountain, I noticed that part of the trail was lined with witch hazel. Tons and tons of it. I filed that knowledge away for the future.

Fast forward to this year. Early spring, as I hiked the trail, I looked for the trees. The leaves were only budding so I couldn’t be sure. (The way to identify witch hazel is that the base of the leaf is asymmetrical where it connects to the branch. Some of the leaves are also kind-of rounded on the other end, although not all of them. The base of the leaf is a better indicator. The trees also are not tall trees, and I’d call them kind of leggy-looking.) These are them: 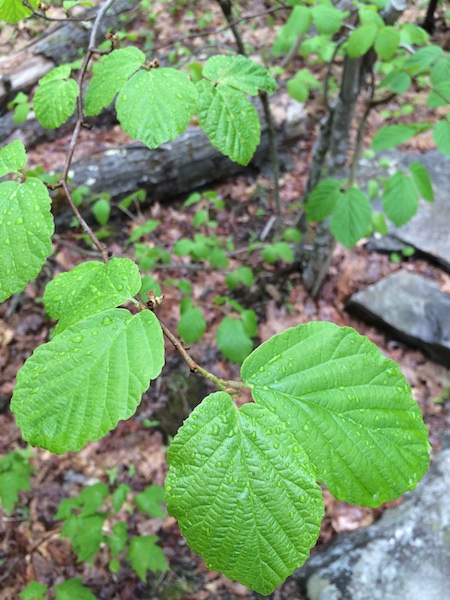 Two weeks later, the leaves were out and I spent some time gathering them (as you can see, I hiked after a rain shower), a few from each tree, giving thanks for the medicine as I harvested. When I got home I put them into a jar with rubbing alcohol, after reading about that as menstruum for a liniment in my herbal studies. I figured it would be a good comparison to the other tincture I made.

Here are the results: 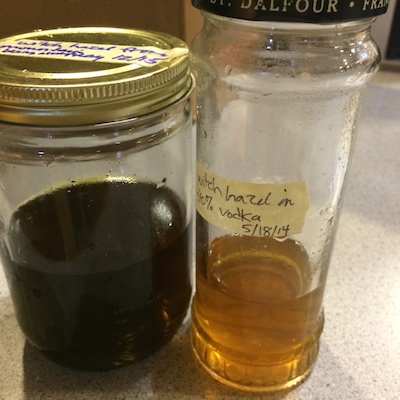 Speaking of that, why is the witch hazel you buy clear? I don’t intend to use the store-bought one in the future. Not if I can buy a bottle of rubbing alcohol for as cheap as a bottle of witch hazel, pick free leaves infused with the energy of thankfulness, and just combine the two for several weeks. In fact, I intend to make another batch or two this summer to have enough to get through the winter until the leaves bud again in the circle of the seasons.

I love making my own medicine!